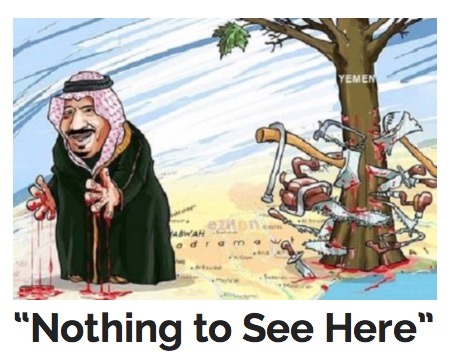 The following would be funny, if it weren’t so incredibly sad. The United Nations’ spiral into clownish insignificance continues unabated.

From the New York Times:

GENEVA — In a U-turn at the United Nations Human Rights Council, Western governments dropped plans Wednesday for an international inquiry into human rights violations by all parties in the war in Yemen that has killed thousands of civilians in the last six months.

The change of direction came as the Netherlands withdrew the draft of a resolution it had prepared with support from a group of mainly Western countries that instructed the United Nations high commissioner for human rights to send experts to Yemen to investigate the conduct of the war.

That proposal was a follow-up to recommendations by the commissioner, Zeid Ra’ad al-Hussein, who detailed in a report this month the heavy civilian loss of life inflicted not only by the relentless airstrikes of the military coalition led by Saudi Arabia but also by the indiscriminate shelling carried out by Houthi rebels.

But in the face of stiff resistance from Saudi Arabia and its coalition partners, and to the dismay of human rights groups, Western governments have accepted a resolution based on a Saudi text that lacks any reference to an independent, international inquiry.

“The result is a lost opportunity for the council and a huge victory for Saudi Arabia, protecting it from scrutiny over laws of war violations which will probably continue to be committed in Yemen,” said Philippe Dam, deputy director of Human Rights Watch in Geneva.

To the consternation of human rights groups, the consensus approach coincides with evidence of sharply rising civilian casualties in Yemen. Mr. Hussein’s spokesman reported on Tuesday that the number of known civilian casualties since late March had risen to more than 7,217, including 2,355 people killed.

The civilian toll from airstrikes was “starkly underlined” by report s that more than 130 people had been killed at a wedding party in Taiz, the spokesman, Rupert Colville, said. The United Nations was trying to confirm what had happened, he said.Mr. Dam of Human Rights Watch was disappointed.

“This was the time to put the parties to this conflict under scrutiny for human rights violations,” he said. “Human Rights Council members have failed to send a clear message to Saudi Arabia and to the Houthis that they have to change the conduct of hostilities.”

Well yeah, what did you expect to happen after the UN named Saudi Arabia to head its human rights panel?