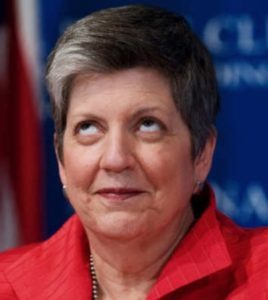 Before I get to the meat of this post, let me provide a little background. Late last year, I covered how the former head of the Department of Homeland Security, Janet Napolitano, was pushing through a 28% tuition hike within the University of California system so that administrators can get huge pay raises. Naturally, students weren’t all that pleased and decided to get creative with their protesting. Big Sis didn’t like this one bit.

What’s amusing is that in a prepared statement she noted:

Sounds reasonable; however, she quickly lost her patience and was heard on a hot mic saying:

SAN FRANCISCO (CBS SF) – University of California President Janet Napolitano remarked to a fellow regent that they “didn’t have to listen to this crap” as underwear-clad protesters denounced potential tuition hikes during a meeting Wednesday in San Francisco.

Napolitano was sitting next UC regent Chairman Bruce Varner as a group of about two dozen protesters shouted loudly, denouncing potential tuition hikes when she made the remark, which she may not have known was being recorded.

As the protests began, the cameras stayed on the regents. There was some confusion over what to do. That’s when Napolitano leans over to Varner and said, “Let’s just break. Let’s go, let’s go. We don’t have to listen to this crap.” Her hot mic caught the comment.

Don’t worry Big Sis, I’m sure you can always get a cushy job at a private equity firm if necessary. The serfs won’t bother you there.

Video of the Day: Ferraris, Maseratis & More – How the Children of Chinese Oligarchs Live it Up in SoCal

Department of Homeland Security Warns Employees: They Face “Legal Action” for Clicking on a Link