Late last month, New York Magazine published a lengthy and very important article titled: Stash Pad – Why New York Real Estate is the New Swiss Bank Account. The entire article is well worth a read, and left me shaking my head in disbelief the entire time. As someone who grew up in New York City, it’s a real shame to see the continued transformation of Manhattan into nothing more than an oligarch playground, or as I sometimes like to call it, “Disneyland for Wall Street.”

One of the most shocking and disturbing revelations from that article was the fact that:

“The Census Bureau estimates that 30 percent of all apartments in the quadrant from 49th to 70th Streets between Fifth and Park are vacant at least ten months a year.”

One of the highlighted building in the New York Magazine article is the 1,000 foot ultra-luxury development known as One 57. We learn more about this beast from My FOXNY:

NEW YORK (MYFOXNY) – New York City has never been known for its affordability, but a new crop of mega-luxury buildings in Manhattan are redefining sky-high prices. One 57 is the 1,000-foot high building looming over Central Park where an apartment has closed for as much as $90 million.

Jonathan Miller appraises the units at One 57. He said if you were to walk by at night the skyscraper would be largely dark because a majority of the units’ owners are international and don’t live here. They are using the apartments strictly as investments.

The new mega-luxury developments are part of the changing face of New York City real estate, said Mitchell Moss, a professor of urban policy and planning at NYU’s Wagner School.

In the video segment attached to the article, Mr. Moss (who looks a bit like a younger Barney Frank) notes: “New York is a safe haven for financially powerful people from around the world.” Indeed, a safe haven for bailed out criminal global bankers. I agree.

I’m sorry, but there is nothing healthy about this. As I highlighted yesterday, it appears The Bank of China is facilitating money laundering for wealthy Chinese to move dirty money overseas and park it in real estate. The article is titled, Chinese Purchases of U.S. Real Estate Jump 72% as The Bank of China Facilitates Money Laundering, and noted that in some California communities 90% of purchases are being made by the Chinese.

This should not be seen as a surprise given the fact that Central Bank and government policy worldwide is to funnel all money to the 0.01%, while the rest of the 1% treads water, and the 99% are rapidly pushed into debt serfdom. Never forget the extremely powerful chart below from the post, Where Does the Real Problem Reside? Two Charts Showing the 0.01% vs. the 1%: 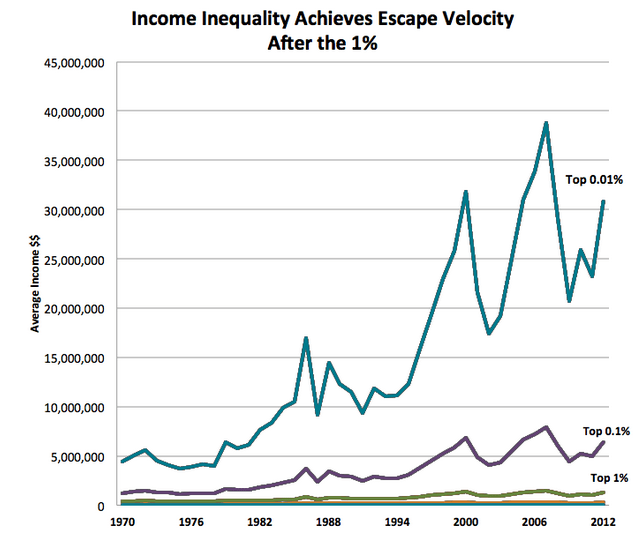 Welcome to Planet Oligarchy, where empty skyscrapers loom over the hordes of freedom-hating, destitute slaves.